The wife of King Latinus and mother of Lavinia, who, when Aeneas sued for the hand of the latter, opposed him, because she had already promised Lavinia to Turnus.

At the same time she was instigated by Alecto, who acted according to the request of Juno, to stir up the war with Turnus. This story fills the greater part of the seventh book of Virgil’s Aeneid.

The fourth king of Rome, is said to have reigned twenty-three or twenty-four years, from about b. c. 638 to 614.

According to tradition he was the son of Numa’s daughter, and sought to tread in the footsteps of his grand­father by reestablishing the religious ceremonies which had fallen into neglect. But a war with the Latins called him from the pursuits of peace.

He conquered the Latins, took many Latin towns, transported the inhabitants to Rome, and gave them the Aventine to dwell on. These conquered Latins, according to Niebuhr’s views, formed the original Plebs. (Dict. of Ant. s.v. Plebs.)

Or Angeronia, a Roman divinity, of whom it is difficult to form a distinct idea, on account of the contradictory statements about her.

According to one class of passages, she is the goddess of anguish and fear, that is, the goddess who not only produces this state of mind but also relieves men from it. (Verrius Flace. ap. Macrob. Sat. i. 10.)

Her statue stood in the temple of Volupia, near the porta Romanula, close by the Forum, and she was represented with her mouth bound and sealed up (os obligatum et signatum, Macrob. l. c.; Plin. H. N. iii. 9), which according to Massurius Sabinus (ap. Macrob. l.c.) indicated that those who concealed their anxiety in patience would by this means attain the greatest happiness.

Hartung (Die Relig. d. Röm. ii p.247) interprets this as a symbolical suppression of cries of anguish, because such cries were always unlucky omens.

Julius Modestus (ap. Macrob. l. c.) and Festus (s. v. Angeronae deae) give an historical origin to the worship of this divinity, for they say, that at one time men and beasts were visited by a disease called angina, which disappeared as soon as sacrifices were vowed to Angerona. (Comp. Orelli, Inscript. p. 87. No. 116.)

(Plin. l. c.; Macrob. Sat. iii. 9.) A festival, Angeronalia, was celebrated at Rome in honour of Angerona, every year on the 12th of December, on which day the pontiffs offered sacrifices to her in the temple of Volupia, and in the curia Acculeia. (Varro, de Ling. Lat. vi. 23; Plin. and Macrob. ll. cc.) 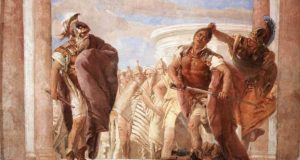