Son of Aristaeus and Autonoë, a daughter of Cadmus. He was trained in the art of hunting by the centaur Cheiron, and was afterwards torn to pieces by his own 50 hounds on mount Cithaeron.

Others relate that he provoked the anger of the goddess by his boasting that he excelled her in hunting, or by his using for a feast the game which was destined as a sacrifice to her. (Eurip. Bacch. 320; Diod. iv. 81.)

A third account stated that he was killed by his dogs at the command of Zeus, because he sued for the hand of Semele. (Acusilaus, ap. Apollod. iii. 4. § 4.) Pausanias (ix. 2. § 3) saw near Orchomenos the rock on which Actaeon used to rest when he was fatigued by hunting, and from which he had seen Artemis in the bath; but he is of opinion that the whole story arose from the circumstance that Actaeon was destroyed by his dogs in a natural fit of madness. Palaephatus (s. v. Actaeon) gives an absurd and trivial explanation of it.

According to the Orchomenian tradition the rock of Actaeon was haunted by his spectre, and the oracle of Delphi commanded the Orchomenians to bury the remains of the hero, which they might happen to find, and fix an iron image of him upon the rock.

This image still existed in the time of Pausanias (ix. 38. § 4), and the Orchomenians offered annual sacrifices to Actaeon in that place. The manner in which Actaeon and his mother were painted by Polygnotus in the Lesche of Delphi, is described by Pausanias. (x. 30. § 2)

During a feud between the most powerful houses in Argos, Talaus was slain by Amphiaraus, and Adrastus being expelled from his dominions fled to Polybus, then king of Sicyon. When Polybus died without heirs, Adrastus succeeded him on the throne of Sicyon, and during his reign he is said to have instituted the Nemean games. (Hom. Il. ii. 572; Pind. Nem. ix. 30, &c.; Herod. v. 67; Paus. ii. 6. § 3.)

Afterwards, however, Adrastus became reconciled to Amphiaraus, gave him his sister Eriphyle in marriage, and returned to his kingdom of Argos. During the time he reigned there it happened that Tydeus of Calydon and Polynices of Thebes, both fugitives from their native countries, met at Argos near the palace of Adrastus, and came to words and from words to blows.

On hearing the noise, Adrastus hastened to them and separated the combatants, in whom he immediately recognised the two men that had been promised to him by an oracle as the future husbands of two of his daughters; for one bore on his shield the figure of a boar, and the other that of a lion, and the oracle was, that one of his daughters was to marry a boar and the other a lion.

Adrastus therefore gave his daughter Deïpyle to Tydeus, and Argeia to Polynices, and at the same time promised to lead each of these princes back to his own country.

Adrastus now prepared for war against Thebes, although Amphiaraus foretold that all who should engage in it should perish, with the exception of Adrastus. (Apollod. iii. 6. § 1, &c.; Hygin. Fab. 69, 70.)

Thus arose the celebrated war of the “Seven against Thebes,” in which Adrastus was joined by six other heroes, viz. Polynices, Tydeus, Amphiaraus, Capaneus, Hippomedon, and Parthenopaeus. Instead of Tydeus and Polynices other legends mention Eteoclos and Mecisteus. This war ended as unfortunately as Amphiaraus had predicted, and Adrastus alone was saved by the swiftness of his horse Areion, the gift of Heracles. (Hom. Il. xxiii. 346, &c.; Paus. viii. 25. § 5; Apollod. iii. 6.)

Creon of Thebes refusing to allow the bodies of the six heroes to be buried, Adrastus went to Athens and implored the assistance of the Athenians. Theseus was persuaded to undertake an expedition against Thebes; he took the city and delivered up the bodies of the fallen heroes to their friends for burial. (Apollod. iii. 7. § 1 Paus. ix. 9. § 1.)

Ten years after this Adrastus persuaded the seven sons of the heroes, who had fallen in the war against Thebes, to make a new attack upon that city, and Amphiaraus now declared that the gods approved of the undertaking, and promised success. (Paus. ix. 9. § 2; Apollod. iii. 7. § 2.) This war is celebrated in ancient story as the war of the Epigoni (Epigonoi).

The only Argive hero that fell in this war, was Aegialeus, the son of Adrastus.

After having built a temple of Nemesis in the neighbourhood of Thebes [ADRASTEIA], he set out on his return home. But weighed down by old age and grief at the death of his son he died at Megara and was buried there. (Paus. i. 43. § 1.)

After his death he was worshipped in several parts of Greece, as at Megara (Paus. l. c.), at Sicyon where his memory was celebrated in tragic choruses (Herod. v. 67), and in Attica. 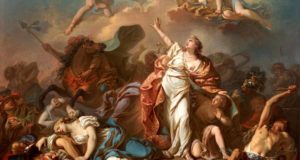